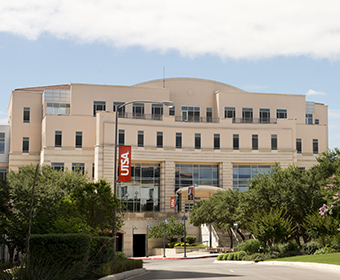 East Asia Institute Director Wan Xiang Yao, Ph.D., and former associate director Mimi Yu, lecturer III in the Department of Modern Languages and Literatures, will be honored at a reception on Monday, Sept. 16, 2019, at 3 p.m. in MB 1.209.

Yao, who has served as director of the Institute since 2014, is stepping down effective Sept. 1, to focus on his scholarship and teaching, and on supporting the new Department of Kinesiology and its upcoming move to the new College for Health, Community and Policy. A professor in the Department of Kinesiology, Health and Nutrition, Yao regularly teaches courses on motor skill learning and performance. His research focuses on the effect of feedback and practice conditions on the acquisition of motor skills; and neuromechanisms underlying muscle contractions and cross-education of motor skills.

During Yao’s tenure, the Institute brought East Asian cultures to the campus and the community by providing an opportunity to develop awareness of and gain conceptual and practical knowledge in East Asian culture, history, economy, and public affairs.

Since its establishment in 2009, the EAI has hosted approximately ten lectures annually on East Asian culture, economy, philosophy, and public affairs. The lectures have attracted from 50 to over 200 attendees to hear scholars and university administrators from China, Japan, and Korea; foreign diplomats; and elected governmental officials from the United States and abroad. The EAI hosted other cultural and educational events on campuses annually such as Kimichi Festival, Korean Speech Contest, Japanese Play Contest, Japanese cooking classes, and China Town Hall meeting. The EAI also hosted summer camps for public school students, and co-organized study-abroad programs in the mainland of China, Japan, and Taiwan.

“I can’t thank Yao enough for his unparalleled passion for the mission of East Asia Institute —to promote appreciation and understanding of East Asian societies and cultures both on campus and in the community. We are grateful for his leadership during his five years’ service as director,” said Lisa Montoya, vice provost for global initiatives. "The institute has contributed so much to the life of our campuses over the past decade. With Yao’s transition, we plan to refocus our efforts on our core services. Even as the East Asia Institute discontinues its programming and operations, , I am confident through the Division of Global Initiatives and other units, such as the Department of Modern Languages and Literatures and Institute for Texan Cultures, UTSA will be able to continue to provide enriching programming and opportunities for the benefit of our students, faculty, and the campus community.”

The University of Texas at San Antonio

The University of Texas at San Antonio is dedicated to the advancement of knowledge through research and discovery, teaching and learning, community engagement and public service. As an institution of access and excellence, UTSA embraces multicultural traditions and serves as a center for intellectual and creative resources as well as a catalyst for socioeconomic development - for Texas, the nation and the world.

To be a premier public research university, providing access to educational excellence and preparing citizen leaders for the global environment.

We encourage an environment of dialogue and discovery, where integrity, excellence, inclusiveness, respect, collaboration and innovation are fostered.

UTSA is a proud Hispanic Serving Institution (HSI) as designated by the U.S. Department of Education.